Marriage and “The Bachelorette”

Yesterday Marco and I went to the mall, and we made a stop at Popcornopolis.  We got a large bag of cheddar popcorn, and then discussed how we would sneak it into the movie theater.  Marco suggested stopping somewhere to get little baggies and hiding them in my purse, as the original bag was too large.  However, we decided to be good and go home to watch our Sunday shows.  This Sunday was special, though.  It was the season finale of The Bachelorette.  Yes, we watch every episode of every Bachelor and Bachelorette, including the reunion shows.  There are great recaps of every episode at Lost Angeles.  It’s a funny blog by a guy who watches it with his wife.

When we got home, we settled on the couch to watch Emily choose her final guy.  Anyone who’s been following this show knows that she feels a “connection” to Arie, but that Jef is the clear winner, despite the missing f.  He’s nice, they have similar senses of humor, they can both shoot clay pigeons like nobody’s business, and he’s hot.  A little tip: we are very likely to marry someone who we feel is like us; equal to us in looks, intelligence,  and humor.   Opposites don’t necessarily attract…we really just want another version of ourselves around.

Anyway, we were both sitting on the couch, on our respective sides.  [Any time we trade sides it feels very strange.]  Our couch is awesome.  It has two recliners, with a seat in the middle.  The middle seat NEVER gets used, unless I feel like cuddling, but it’s difficult to cuddle from the middle when he’s totally reclined.  So we were both reclining, with the popcorn bag sitting on the middle seat.  We each had a paper towel in our laps, and we were taking turns pouring popcorn onto the towels.

At some point, Marco felt the bag was going to spill all over the couch, so he moved it closer to his side and propped it up.  The mood instantly changed.  I gave him a warning look, because that popcorn was half mine, and now he was taking ownership of the bag.  On my next refill, I held the bag on MY side and propped it up.  Then he took it back, and we went back and forth like this, both of us suspecting the other was going to finish off the popcorn without sharing enough.  He finally relented and graciously handed the bag to me when we were down to the last few kernels.

What struck me during this hour was that we were watching a TV show where the sole purpose is to find someone to marry.  They go from one exotic locale to the next, alternately falling in love and getting dumped, just so they can finally find “the one” and end up sitting at home on the couch fighting with their spouse over who gets to hold the bag of popcorn.

Marco and I laughed over this, and I realized that this is what it’s all about.  It’s not about the big romantic scenes; it’s about the quiet, funny, everyday life that we get to share with one another.  I feel so lucky to have found “the one” who has a sense of humor like mine, and who loves me just as I am.

Posted in Love and Marriage and tagged love, marriage, popcorn, the bachelorette. Bookmark the permalink.

As a high school teacher, I have the summer off.  The end of the school year was especially stressful, and it is my goal to lower my stress this month.  Here are some things I’ve done, and it has been wonderful to try them out!

First, I started going to the gym more.  I took a PiYo class, some Zumba classes, and I’ve been using the treadmill.  PiYo is a combination of Pilates and Yoga, and it didn’t seem too difficult.  But the next day…wow!  I could hardly sit down because my thighs were so sore!  Zumba is always fun, and I’ve posted about that before.  The treadmill is always one of my favorites.  I do about 20 minutes, and I try to run for half of that.

Second, I started taking vitamins regularly.  I always have them sitting around, but I’ve become accustomed to taking them every day now.  Also, I started eating breakfast!  I have cereal or oatmeal, with almond soy milk and wheatgrass powder.  I recommend wheatgrass for the energy it gives, but I do NOT recommend wheatgrass powder…it smells terrible, and it has a very strange texture.  Next time, I will either do shots of wheatgrass from a juice store or take wheatgrass tablets.  However, I am too stubborn to do it now.  I spent the money on the powder, and I’m going to finish it.  Luckily, I’m almost halfway done with the bottle. 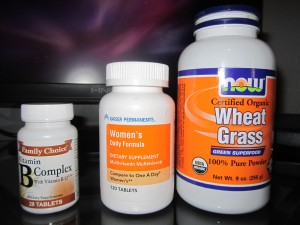 I also started something I’ve never done before…acupuncture!  I was a bit apprehensive, but I was excited about it, because I knew that it might relieve the knots I carry in my shoulders and back when I’m feeling stressed.  I looked it up online, and here is a diagram I found:

It looks scary, I know, but I guess the needles are all supposed to follow “meridians,” or lines along the body.

I found an acupuncturist near my home, and at my first session he did a thorough interview.  He was especially interested in my activities.  He checked my pulse on both wrists, and he looked at my tongue.  I thought this was fascinating.  He said my tongue had a crack in it, which indicates digestion problems.  He said if I have digestion problems, I’m not adequately absorbing all the nutrients in my food.  He also said I seemed stressed.

The first thing he did was have me lie face down on a massage table, and he told me he was going to work my “meridians.”  He did this by giving me a chiropractic-style massage for about 30 minutes.  It was wonderful.  Then he had me turn over, and he put five needles in my abdomen (for digestion), and five needles in my forehead (for stress).  The needles were tiny, and the only one I could feel was right between my eyebrows.  The rest were in less sensitive areas.

He told me to lie still for about 40 minutes, and he put some heat lamps over me.  He left the room with the lights dim and soothing music playing.  The combination was very relaxing, but he gave me a panic button, “just in case.”

But the really fascinating thing happened the next day.  Not only did I digest my food well…we won’t go into that…but the crack in my tongue was almost imperceptible!  Unbelievable!

It’s really difficult to take a picture of your own tongue: 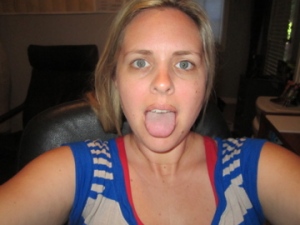 I will continue to try acupuncture, and more stress-relief techniques in the future.